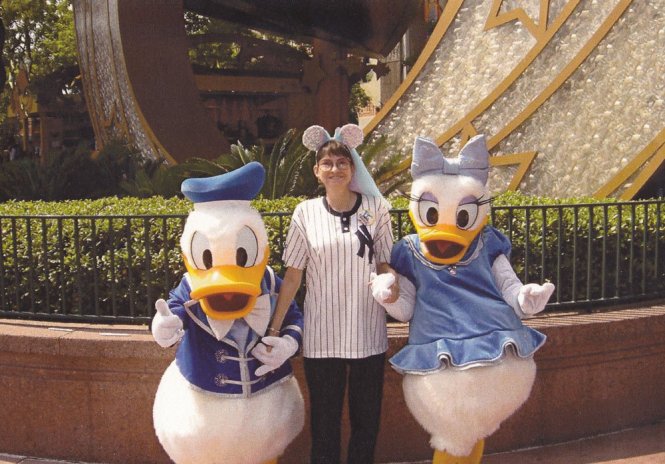 My mom has never been a fan of Disney, except for Donald Duck — she liked him because he’s always grumpy and feisty. Growing up, I was repeatedly reminded that I didn’t need a prince to save me from anything and that I was strong and independent. I had always wanted to go to Disney World, but for reasons unbeknownst to me at the time (it was REALLY expensive and we didn’t have a lot of money), we never got there. About a month before my college graduation, I decided that hubby (then-boyfriend) and I were going as a graduation present to ourselves. We fell in love with all things WDW and go there every year.

When it came time to plan our wedding, I knew I didn’t want a big ceremony with a lot of guests. I was desperately trying to figure out how to invite immediate family only without offending anyone, but let me tell you — that’s impossible. I started to look into destination weddings and discovered that WDW offered wedding packages. I thought they would be completely out of our budget and that no one would come, but we made it work and it was fabulous. We were limited to a certain number of guests, so it was the perfect excuse to only invite our immediate family members. I didn’t have to make small talk with a bunch of people I barely know, we didn’t spend a ton of money for everyone else to party, and we made wonderful memories — perfect.

I know that my mom was disappointed in our chosen venue even though she never said anything to me about it. The only thing she ever asked me was if we were going to get our marriage blessed by the Catholic church when we got back. I told her I’d think about it (we finally did that on St. Patrick’s Day — in her honor — last year). I knew that having to go to “Mickey World” as she called it, was not her idea of a good time. Not to mention it was August and it meant she had to get on a plane (she had flown many times in her life, but never post-9/11 and she was extremely nervous).

I never in a million years would have predicted that she would have a good time. But take a look at that smile on her face — complete with “princess” ears! She had the time of her life and wouldn’t stop talking about how great it was right up until she passed. In fact, she had SUCH a good time that she and my dad came down in 2009 for an entire week with me and hubby. We took them to all the parks, to character meals, on rides, and they even stayed on property. She bought ears and pins and shirts and jewelry. It was a wonderful sense of accomplishment for me to turn my mother into a fan of WDW — it was something she was so against yet grew to love because of me. She thanked me so many times for getting her to see the light.

We had plans to go back together in 2011 — after she “got better” — but obviously that never happened. That was the only year that hubby and I didn’t go either. It was just too hard to be there knowing that she was supposed to be there with us. As much as I miss her and as much as it hurts, I can’t help but smile when I look at the pictures of her with the characters. She was always just a big kid and it comes out so much in these photos. Although I’m sure she was already very sick in this picture (from 2007, and she was diagnosed with stage 4 lung cancer in June 2010), this is how I want to remember her: healthy and happy and having fun.

One thought on “Throwback Thursday: How I Made My Mom a Fan of the Mouse”