When I was little, I dressed up as all kinds of things: a clown, Jem, Lady Lovely Locks, a 50s girl, “Miss Kitty” (which I later learned was basically a madam from the wild west – I’m sure that went over really well in my strict, Catholic elementary school – I liked it because it had a pretty pink dress and a feather for my hair), etc. Freshman and Sophomore years of high school I was too cool to dress up – I’m pretty sure I went trick-or-treating as a “Catholic School Girl” my Freshman year – really original, Er.

Then Junior year hit and my friends and I were borderline obsessed with the Spice Girls. We went to see the movie in the theater and everything, although I don’t have a clue what it was about – I must have blocked it out of my memory. We knew every word to every song on their CD. Naturally, we HAD to be them for Halloween. So, this totally happened: 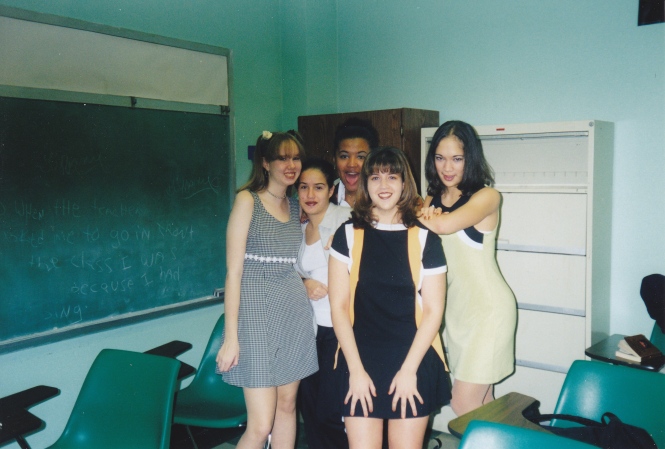 Obviously I was Baby Spice. I borrowed a too-short dress from my friend, V (Posh Spice in the green), and threw my hair into some pigtails with mismatched scrunchies and I was all set. V and I were at my locker after this picture was taken and our slightly-pervy-but-really-cool Freshman World History teacher was in the hallway. He took one look at us and exclaimed, “I’ll tell ya what I want, what I really really want!” Our jaws hit the floor and we booked it out of there laughing our butts off. Everyone loved our costumes and we even made it into the yearbook!

Flash-forward to Senior year. I really wanted to do another group costume and I had it stuck in my head that we should somehow do the Wizard of Oz. I told V and S my plan and they immediately agreed – V volunteered to be the Scarecrow, S said she wanted to be the Good Witch, and I claimed Dorothy since the whole thing was my idea. We asked our other friend, S (Sporty Spice above) if she wanted in and she reluctantly agreed but only if she could be Toto. Fine by us! That left us needing a Tin Man, Lion, and Wicked Witch. We knew we needed guys for two of the parts, so we turned on our girlish charm and persuaded my now-husband and his friend to help us out. Hubby said he would be the Lion and Friend said he would be the Tin Man – Friend said he would handle his costume so we let him figure it out. We asked our History teacher if she would mind being the Wicked Witch, and she thought it was a great idea, so we were all set.

The night before costume day at school (which was not actually ON Halloween, mind you), V, S, and I set off in search of costumes (nothing like waiting until the last second). We found mine and S’s right away, along with some lion accessories for hubby. We thought the Scarecrow would be super easy to find, but we drove all over the state (and by that, I mean that we tried at least three stores in our immediate area, but it took all night) and came up empty-handed. We finally ended up at a real costume store (i.e., NOT Party City) and told the lady what we were looking for. She said we were in luck because she happened to have one more Scarecrow! V tried it on and it was perfect. We were so excited, we were literally bouncing all over the store. We went to pay and our hearts broke when she told us it would be $50. Between the three of us, we had a total of about $38. The owner saw our disappointment and we explained the situation to her. She didn’t even think about it – she just handed over the costume for $38 and told us to enjoy it. She said that we seemed like “such nice girls” and she knew we really needed it.

We ended up with a blonde Dorothy (with purple platform Skechers instead of ruby slippers because we couldn’t find any red shoes), a Good Witch who was mistaken for a “pregnant fairy” by a teacher, an AWESOME Tin Man (Friend went all out and painted his face and hands silver!), a slightly-moody Toto, and a really, really good Scarecrow. We made the yearbook again (I know I have a color photo somewhere, but for the life of me I cannot find it):

V and I left school that day and she had to go to the post office to mail a college application. She didn’t want to get out of the car looking like a weirdo, so after much arguing, I was nominated to be the one to go inside. May I remind you again that it was NOT actually Halloween yet and I was dressed up as Dorothy? I got a lot of looks and a few comments from people asking if I knew what day it was, but I survived and V got into that school so it all worked out.

While we were doing that, hubby, the Good Witch and Toto were stuck at a gas station attempting to put out a minor car fire. I wasn’t there, but I can imagine the looks that THEY got.