My husband and I are not big drinkers and are definitely not experts by any means. I like wine and am not overly picky, while he prefers mixed drinks. I did a bunch of wine tastings in Italy when I was there for work, but I’ve forgotten most of what I learned and pretty much just remember that chianti classico is my favorite.

That being said, on vacation we like to try new drinks. People probably don’t think of alcohol when they hear “Disney World,” so they would probably be surprised to learn about all the different options available! We really wanted to try a drink in every country at Epcot this time, and we were almost successful.

Mexico
We are big fans of the drinks in Mexico. Hubby’s favorite is the margarita stand outside, while my favorite is La Cava de Tequila snide the pavilion.

The “Fiesta Margarita” is available at the stand outside and is layered with lime, strawberry, and mango flavors. Later in the week, we got one that was just lime and mango, so you can mix and match however you’d like. These are pre-made margaritas in those big slushie machines, so they’re not particularly strong, but they’re cold and tasty! 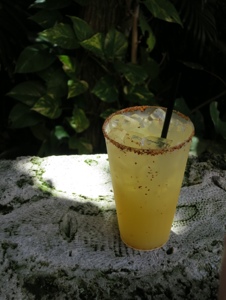 La Cava de Tequila makes margaritas made-to-order, and they are fabulous. I chose the pineapple one this time, and it was good, but not my favorite. I’ve also had the classic and the avocado – for someone who hates avocado, I think that is my favorite drink here!

Norway
Norway offers shots, beer, and wine. We pondered the choices a few times but nothing on it ever appealed to us.

Germany
Germany obviously has beer options, but neither of us drink beer. Before we left NJ, I heard about a wine flight offered in the back of the pavilion, so that was immediately put on my must-do list. You get a choice of 3 wines and they’re served on a map with a short description of each.

The “Diva” Riesling was AMAZING. Even the hubby liked it and he doesn’t like wine. It was light and sweet and just perfect.

China
We didn’t get anything from China this time, but I have tried the green tea plum wine slush in the past – I didn’t like it.

America
We’ve never seen anything worth trying here. On one trip when we were attempting to drink around the World, we ordered a beer and ended up throwing most of it out.

Japan
I’ve tried the hot sake from the kaki gori cart before and it was ok, but not the best choice for the middle of summer. They’ve expanded their options and I figured I would try a plum wine.

It was… OK. I didn’t love it, but I didn’t hate it either. It was nice and cold and fruity, but not something I would get again.

Inside Mitsukoshi, they have a sake bar. I’ve always wanted to try something here, but I’ve been too shy. I don’t know why exactly. I was buying candy and happened to notice that they had a sparkling sake which instantly grabbed my attention. I loooove sparkling anything. Next time we were in there, I ordered one and it was fantastic. It was light and bubbly and really fruity… Almost like a super light champagne. I would definitely get this again, or even search for it at home. 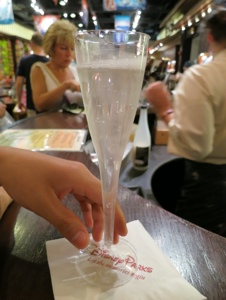 Morocco
They serve beer and mixed drinks here, but nothing piqued our interest enough to try.

France
This is another one of our favorites. They serve this great Grey Goose lemon slushie at the wine kiosk outside, and we usually make multiple stops here on every trip, but the price is now over $10 per drink and it’s just not worth it. We each got one for tradition’s sake, but this is no longer our favorite Epcot drink.

I had heard about a wine flight here too, so I ventured off in search of it and found a little wine store I never knew existed. They also give you a choice of 3 wines, but don’t offer the fun map like Germany does. We had the Chardonnay, Pinot Noir, and Reisling, mostly because those were the ones I knew I could pronounce without embarrassing myself. 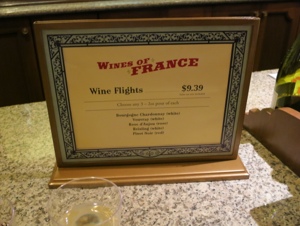 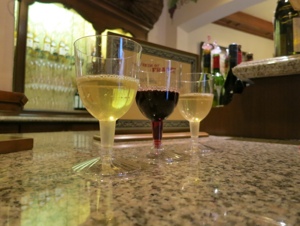 They were all ok, but Germany won hands down.

UK
We’ve always skipped the UK because we assumed all they offered was beer. We actually ventured inside the Rose & Crown Pub this time and I discovered my New Favorite Drink: the English Rose. It’s probably not authentic at all, and was just created by some Imagineer somewhere, but for only $7.00, it’s a great deal and super delicious. It tastes like fruity Sprite, but actually has quite a bit of gin in it. We got another one later in the week that was considerably stronger, so it really depends on who makes it. 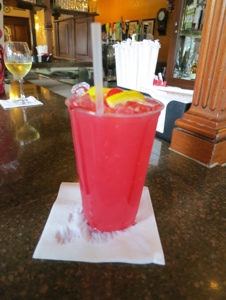 Canada
Canada is another pavilion that mostly serves beer and an invented cocktail (the “Torontopolitan”) so we took a pass here as well. Having eaten at Le Cellier multiple times and enjoyed the Inniskillen ice wine, nothing else was good enough 🙂

Animal Kingdom
We’ve never tried any drinks at AK before, but saw a margarita cart this time and decided to get their version of Epcot’s Fiesta margarita: the Triple Yeti Blast. Same concept, but not as good. 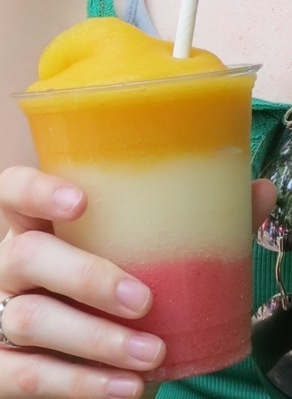 Polynesian Resort
I have always wanted to visit the bar here, but we never have time or always put it off and forget about it. We had some extra time before our dinner reservation at Chef Mickey’s, so we decided to go have a pre-dinner drink. I knew I was going to get the Lapu Lapu because even though it gets so-so reviews in taste, I NEEDED to have a drink in a pineapple.

I wouldn’t order it again, but it was fun and I’m glad I got it. Hubby ordered the habanero lime margarita and WOW. We will definitely going back there to get more of those! I would even dare say that it is my favorite margarita in WDW.